skip to main | skip to sidebar

A Fine Place For Birds 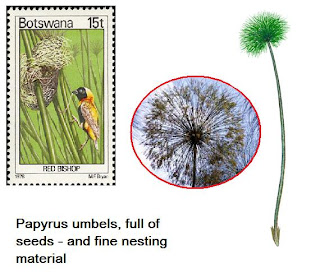 The ancient Egyptians hunted birds in papyrus swamps along the Nile, a favorite place for Pharaoh to get away from it all, 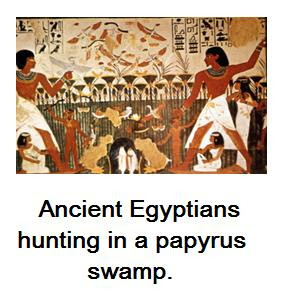 and found that birds liked the flowering heads of papyrus or umbels, which are up to three feet wide. They provide fine nesting material and are full of tiny seeds, while fish and aquatic invertebrates abound in the swamp water below. In the upper canopy among the umbels are found the Papyrus Gonolek, Papyrus Canary, Caruthers's Cisticola, three swamp warblers and hundreds or visiting bird species. Swimming birds as well as herons and egrets feed and nest along the edges of the swamp, it is here we find the threatened Slaty Egret (Egretta vinaceigula, world population of only 5,000 to 10,000 birds), which breeds in the papyrus swamps of the Okavango delta. 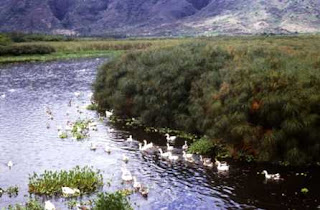 One of the most extraordinary birds known to man lives only in papyrus swamps, the Shoebill (Balaeniceps rex) a stork-like bird with an outsized head and huge primitive beak ending in a long hook. Its range extends south from Sudan to Zambia. Large numbers are captured 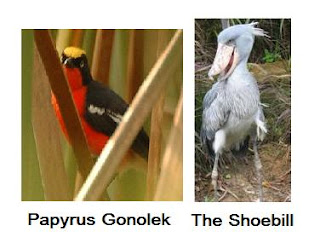 for zoos, which exhibit this bird as a curiosity. The total population of shoebills, once estimated at about 11,000 to 15,000 birds, has declined in the late 1990s to about 5 - 8,000. According to the Animal Welfare Institute, Tanzania's population of 2,000 birds is one of the few stable ones, protected as it is in the country's first Ramsar International Wetland site.
Papyrus swamp habitats throughout Africa are being drained, burnt over and converted to agriculture, in addition, they are sites for spraying mosquitoes, mollusks and tsetse fly using pesticides that are toxic to small fish and insects, which contaminates the food chain of aquatic birds and is taking its toll each year.
Yet the swamps in Africa also provide stopping over places each year for millions of migrating birds. One of the most valuable resting stops on the migration route from Europe to Africa is the floodplain of the Jordan River Valley an extension of the African Rift Valley. Within the Valley a most 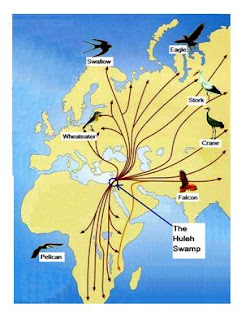 important resource is the Huleh Swamp, a papyrus swamp in which at least 530 species have been recorded and in which 25,000 cranes spend the winter. This is out of a population of 75,000 cranes that fly back and forth between Europe.
Considering that an estimated 500 million birds pass through the region each year, and the extent of habitat that papyrus provides for birds in Africa (estimated at 6 billion acres) it appears that papyrus swamps are a major world resource for birds. Surprising then that so few people know what the swamps look like, how they function or what their future is. And not only are they a major habitat, in many lakes and rivers in Africa they are the only natural filters left for sewage and soil erosion, something that I will discuss in the next post.

Posted by BwanaPapyrus at 4:26 PM

BwanaPapyrus
A Fulbright Scholar to both India and Malaya, John Gaudet is a writer and practicing ecologist. His early research on aquatic ecosystems, funded in part by the National Geographic Society, took him to Uganda, Kenya, Sudan, Ethiopia, and many other places in Africa. His work has been discussed in Nature, and by Peter Moore on the BBC show Science Now, and by Alan Cowell in the New York Times. He is a trained ecologist with a Ph.D. from University of California at Berkeley and is the author of many scientific papers on ecology. His most recent non-fiction book Papyrus: The Plant That Changed The World published by Pegasus, NY (2014) will be followed shortly in Sept. 2018 by another Pegasus book, Pharaoh's Greatest Treasure: The Origin of Paper and the Rise of Western Civilization. His earlier novel The Iron Snake, historical fiction, a novel about a railroad in Africa that affected millions of people is available on Amazon. His writing has appeared in the Washington Post, Salon and Huffington Post